There are some musicians who throw themselves into performing on stage with as much gusto and energy as they do cooking. They are as passionate about singing, songwriting and honing their craft much the same as they are at preparing and serving up a favourite recipe. One such musician is Shane Flew who I have performed with many times over the years and witnessed first-hand his high level of enthusiasm exuded on stage which also extends to his passion in the kitchen.

Interestingly before becoming a full-time musician, Shane was employed in the food industry briefly. Firstly a stint in the Mossvale Abattoir (so I am not surprised at his skilful ways with a knife watching him slice up the Snapper) and then as a kitchen hand at a North Sydney Hotel. While being a kitchen hand, he got some time off work to attend the Nimbin Aquarius Festival in 1973 – Australia’s answer to Woodstock. This set him on a path to pursue music for a living so hung up his apron from then and has had a very successful musical career ever since, working with many great Australian Artists as a drummer, guitarist and vocalist. In more recent times he has forged his own solo-career being a clever songwriter as well.

Having survived a recent bout of cancer, healthy eating is of very high-importance to Shane. His approach to cooking and food preparation involves the freshest ingredients possible, preferably organic and sensible eating habits. When it came to sourcing and picking out the freshest Snapper for this recipe, he looked into the eyes to make sure they were bright and clear rather than dull-eyed as this in an indication they may be past their prime. 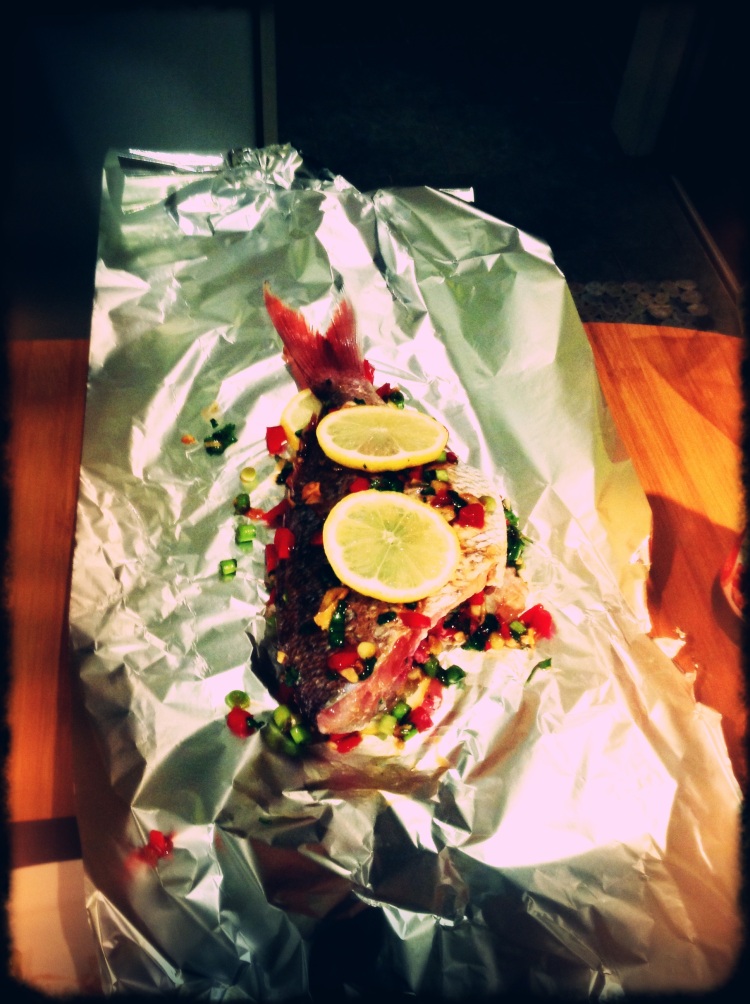 After contacting Shane for a musicians recipe, he made the suggestion to visit my place and cook his chosen dish up for me. This was a fabulous idea, a dinner party at my place where didn’t have to prepare anything! I just had to supply the vegetables and the oven, perfect. The Snapper was also delicious. South East Asian flavours of ginger, spring onions, chilli and coriander infused well into this baked dish, I must invite Shane over to cook for me more often 🙂

2) Place all chopped vegetables in a bowl with Olive Oil and Soy Garlic Marinade, use hands to mix together

3) Place Snapper on a board and carefully slice deep down one side of the spine, creating a cavity

4) Cut three incisions on side of Snapper (as pictured)

6) Place Lemon slices over and sprinkle with sea-salt

Place all ingredients in a salad bowl, mix to combine